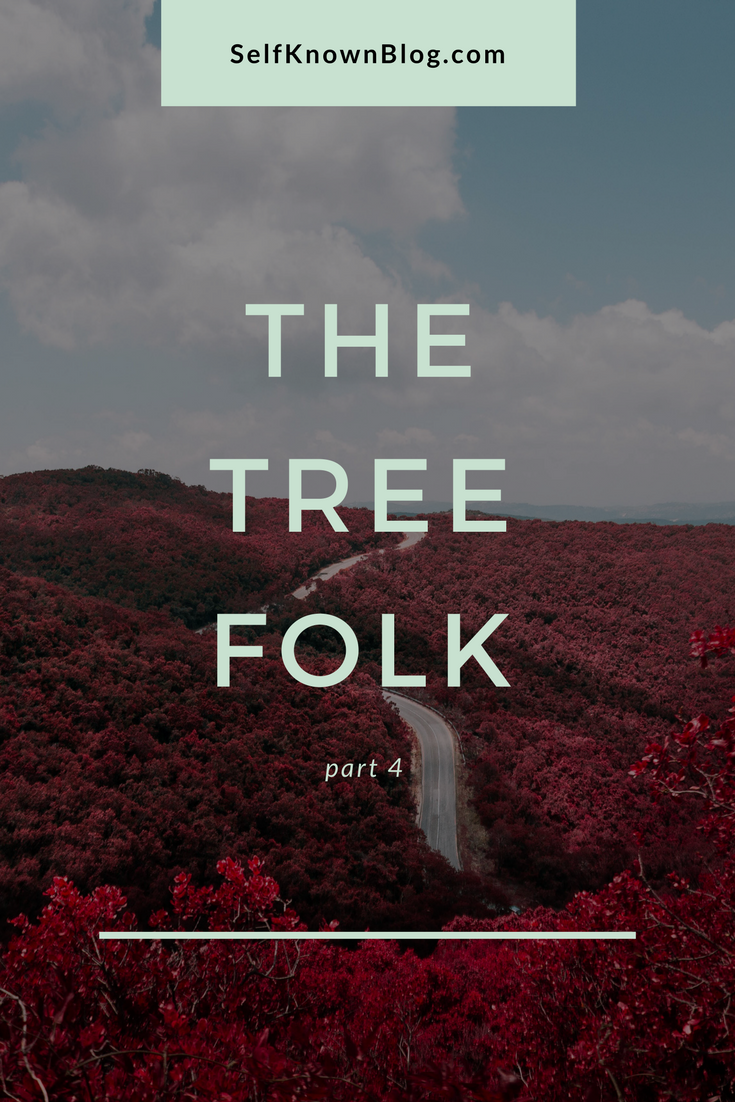 I can't believe it's been two weeks since the last update of The Tree Folk? I took a pause in updates to gather my strength and focus on some other things, but now I'm back and alive as ever!

Thank you so much for the encouraging comments you leave. You have no idea how much good a few kind words can do for a soul. Especially one that is hypersensitive when it comes to sharing her writing... I wish I could express how thankful I am for you. But words just don't cut it.

When we last saw Sienna she was meeting Prince Gorrell (hehe) and had taunted Lief. Anyone have any ideas as to where this will lead? Feel free to comment your theory below...

Did you miss parts one through three? No biggie! Visit this page to catch up.

By that point, Sienna was completely lost. Of course, the talking tree wasn’t her biggest problem. Now there were pasty princes and this green boy who was comedically named Lief.

Sienna briefly wondered how it was spelled. In the traditional l-e-a-f sense, or something different?

Whatever the case, Lief was angry. He was traveling much too fast and light, and there definitely wasn’t enough slack on Sienna’s bindings to give her much mobility. They couldn’t have been a couple hundred yards away when she spoke up.

“Stop, you’re going too fast--” She slipped, heading right for the edge of a cliff. She would have screamed had Lief not caught her by the bindings around her hips and throat--cutting off airflow. He hauled her back up onto the solid dirt, sitting her down by a tree. He slipped a knife from his belt and Sienna broke.

“Whoa! You are not coming near me with that thing!”

“OH?! Oh yeah! You got me tangled up in this without using a dagger, can’t you just… undo it the same way?” Sienna realized she was acknowledging that Lief had indeed encased her in vines without physically moving--something she did not want to think about.

Lief used his fingers to twirl the dagger and slide it back into its place on his belt. “We’re not supposed to do that unless it’s an emergency.”

Lief shrugged and settled into a crouch before her. In the shade he looked less sickly and more… human. Except when he turned his head. Sienna could see the tips of his ears and she did not want to add the fact that they were pointed to her list of things that made this all the more weird.

“Was your ego in cardiac arrest?” she suggested. The snarkiness of the comment made her relax a little.

Sienna couldn’t have said it better herself.

“We Folk are passionate about defending our valor. I’m sure the Prince and the Elder will overlook my actions.”

“I wouldn’t be so sure about that. They did stick you with me.” Something, Sienna had noticed, that bothered him greatly.

Lief said nothing more and Sienna expected silence. But the forest around them was alive. Birds called out to one another in the distance, prominent over anything else.

“What’s going on?” she said when she couldn’t take the warbling anymore. “Why am I here?”

Lief looked up from his hands. He had made himself busy by using the curl of his knife to scrape the skin off the end of a stick. “Define here.”

“Here as in kidnapped by you stupid green people!” Sienna snapped. This earned her a toothless smile.

“Oh, that one’s easy.” Lief shifted, and in one slash, cut the bindings off Sienna without touching her skin. “You’re here to answer our questions.”

Comment "pickle buckets" if you made it this far.